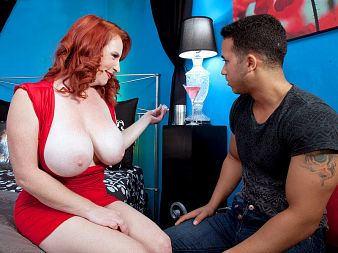 “I’m a Gemini,” 40-year-old wife and mom Red Vixen said. “Geminis have split personalities. One side of me is a conservative family mom, and the other is sexy and adventurous. Naughty. A little naughty. I like a combination of both, and that keeps my marriage interesting. People aren’t married for all those years with just a blah marriage. You have to have fun, spice. You have to change it up and have something different to keep it going. And the attention I get from other people is exciting for him, too.”

Red told us that her husband brought out her sexy side.

“Then one day, he just started taking pictures of me, just sexy stuff,” she said.

“We would have threesomes with other men, and we would videotape it once in a while for ourselves,” Red said. “So, I’ve seen myself having sex on-camera, but I prefer not to. He’s into it. We would tape it ourselves. I had my naughty website for a while. It was just an amateur website.