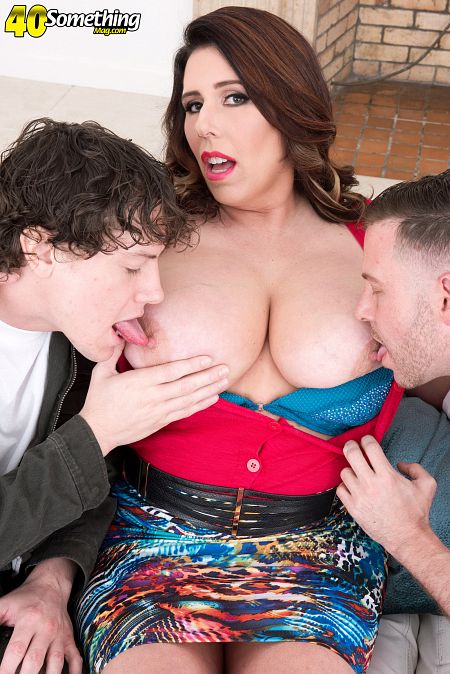 “I sent my pictures in to SCORELAND for the opportunity to get some modeling work, and within a couple of hours, I was throwing stuff in a bag and trying to catch a plane,” big-titted dance instructor Amaya May from Illinois said. “I was, like, ‘Oh my god!’ Made the plane. I thought I was going to miss that. I got picked up by a nice gentleman when I landed and was driven to my hotel. I got a good night’s sleep and was driven to the studio the next morning. Super exciting.”

Yes, super exciting, and it only got better. Amaya not only showed off her huge tits and tight pussy for all the world to see; she fucked, too. And in this scene, she gets DP’d.

Amaya likes men who pay attention to what she likes to do in bed. Her favorite position is doggie and she says foreplay depends on her sex partner.

Amaya spoke with us about this scene.

Amaya: Tony during the DP. Damn! I’m gonna touch myself thinking about it!

40Something: In your model questionnaire, you wrote that you’re so-so with anal-licking. Has a guy ever tossed your salad and have you tossed a guy’s salad?

Amaya: I’ve had mine tossed and tossed a few, although some guys won’t let you near it!

Amaya: I love using toys. I’ve played with them in every way possible!

See More of Amaya May at 40SOMETHINGMAG.COM!