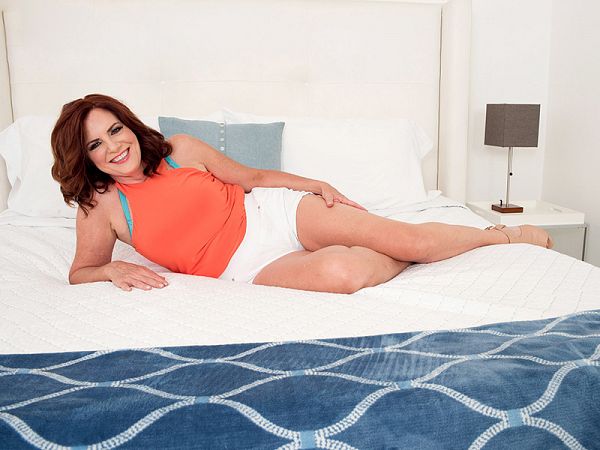 In today’s installment of 50Plus MILFs Who Can’t Keep Their Fingers Out of Their Pussies, big-titted redhead Andi James fingers her hairy hole while giving you plenty of jack talk for encouragement. Not that we need much encouragement when this sexy 52-year-old divorcee and mom is in our line of sight, but it’s nice nonetheless.

50PlusMILFs: How did we find you?

Andi: I found you. I was just sorta carousing around the Internet and I saw an ad and just thought I would answer it.

50PlusMILFs: Did you know what it was for?

Andi: I didn’t, really. I wanted to explore it. I thought it might just be a photo shoot in sexy lingerie. So I called and found out what it was all about.

50PlusMILFs: And your reaction was?

Andi: Well, I wouldn’t say there was no hesitation, but I was really ready to do some exploration. I’ve done some sexual exploration throughout the past 15 years or so, so this is new territory, and I thought I’d try this, too. Why not?

50PlusMILFs: Had doing this ever crossed your mind before?

Andi: You know, they do sometimes, and I’m surprised by that. I don’t understand it, but I guess some younger guys like older women who maybe know themselves a little better and what they like.