As real as it gets

As real as it gets 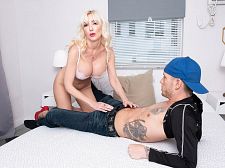 When this scene opens, very blonde wife Victoria Lobov, 47, is wearing red lipstick and sexy red lingerie that her big, fake tits are pouring out of. Tyler can’t keep his hands off of her, and we can’t blame him. Her lace bra is very sexy. Her tits are amazing. Tyler motorboats himself. He’s a tit man, and Victoria is just his kind of woman.

Victoria is obviously enjoying herself, too. She loves how much attention Tyler is paying to her tits and grinds her pussy into his crotch. She can feel him getting harder and harder. She wants his dick, so she takes off his pants and swallows his cock.

40SOMETHING: Where is the craziest place you’ve ever had sex?
Victoria: In the lavatory of an airplane. It was a commercial flight. We were going to Europe. It was a long flight. I was with my husband, and it was getting boring, so you drink, then you drink a little more and you touch each other and get all excited. And you have a lot of time, so he needed to go to the bathroom because he couldn’t sit there with a bulge in his pants, and then I thought, “Why not follow him?” So I just did that. I knocked. Nobody saw me, and there were two of us inside, and it was tight.

40SOMETHING: Did the flight attendants see you go in there?
Victoria: No. It was a long flight. Nobody saw us. Well, maybe somebody saw, but nobody interrupted us.

40SOMETHING: Was this all-the-way sex?
Victoria: It was sex! All the way!

40SOMETHING: What were you wearing?
Victoria: I was wearing a dress. A mini-dress. It was easy access! We just stood there and we did it. It was the most-fun I’ve ever had. It was forbidden. It was something you’re not supposed to do. It was just exciting. Afterwards, I thought we could’ve been caught, but it was worth it.

40SOMETHING: Did the possibility that you might have been caught make it more exciting?
Victoria: Oh, yes, definitely.