Ass-fucked by her daughter’s fiancee

Ass-fucked by her daughter’s fiancee 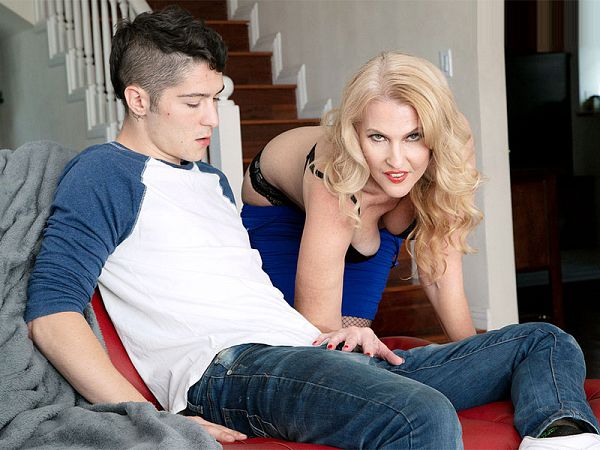 “I have three kids and two grandkids,” said Lacy Cummings, a 52-year-old divorcee with a tight, slim body and long, beautiful, blond hair.

Lacy has kids, alright! For example, in this scene, she has a daughter. We don’t see the daughter, but we do see her daughter’s fiancee…Lacy’s future son-in-law. He’s sitting on the staircase in Lacy’s house, thinking he’s all alone. So he whips out his smartphone and starts watching a video. The video is of Lacy, his future mother-in-law, fucking at 50PlusMILFs.com.

Now that’s the kind of thing that doesn’t happen every day. And the thing is, Connor, the future son-in-law, isn’t all alone. Because while he’s intently watching the video, Lacy comes down the steps behind him and whispers in his ear, “I guess you found out my dirty little secret.”

What happens next is the stuff of fantasy: Lacy sucks Connor’s cock. They 69. Connor fucks his future mother-in-law’s pussy. And then he fucks her ass!

Can you imagine the conversation at Lacy’s family’s holiday table?

Lacy is 5’8″ and weighs 132 pounds. She has nice, firm tits. She gives massages in Las Vegas, where she lives. We’re guessing she gives happy endings, too. She used to be a dental assistant. Then she discovered what she can do with her body.

She goes to swingers clubs for fun. And when we asked her about her sexual fantasies, she said, “I have so many.”

We wonder if one of those included getting ass-fucked by her son-in-law.

See More of Lacy at 50PLUSMILFS.COM!