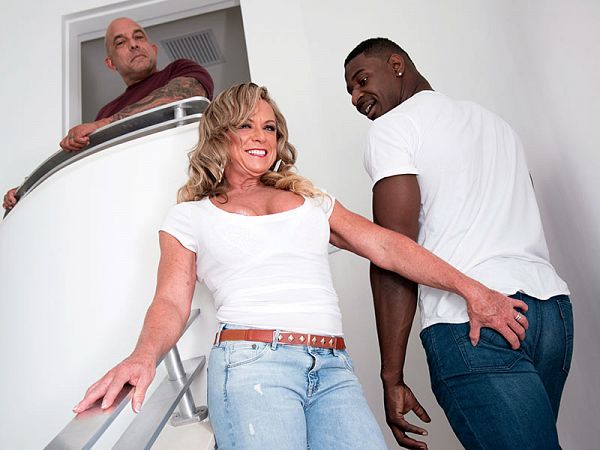 Missy’s husband comes home, and Jax is with him. She’s looking very sexy in a tight top, tight jeans and heels, and Jax notices.

Missy’s husband decides to take a shower, which leave her all alone with Jax. She has him sit on the couch and tells him to show her his cock.

She takes it out and sucks it, and when hubby comes back from taking his shower, he can’t believe what he’s seeing: His wife sucking on his best friend’s big, black cock.

“What the hell are you going?” he says.

“Oh, honey, don’t make like you didn’t want to see me suck a big dick,” she says. “Sit down. Just sit down and watch me.”

So he does, and he has a front-row seat as his 50-year-old slut wife sucks Jax’s BBC and takes it in her tight pussy and ass. Looks like Missy has her hubby trained well.

“I once had a train pulled on me in a glory hole booth,” said Missy, who’s a hairstylist back home in Detroit, Michigan. She once sucked off four 20something guys in a hotel room. She loves being DP’d. How often does she have sex?

“Every single day,” she said.

And not always with her husband.

“I love DP. Being filled with cocks…I love that! I’ve done it quite a few times. The first time was about six years ago. It was set up. There were two other guys and my husband, and my husband sort of primed me for it. He was playing with my ass while I was getting fucked, and I was sucking somebody off at the same time, and he was playing with my ass, and then he started fucking it at the same time the guy was in my pussy. It just happened, and it was very good. I knew I loved anal sex, so DP was even better.”