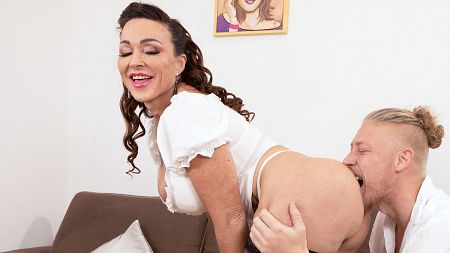 Aubrey Black doesn’t have to do much to get a man’s attention. Basically, she just has to stand in front of him. The guy in this scene tries to play it cool, but that’s impossible when Aubrey has her eyes on you. Before long, he’s playing with her big tits and shapely ass, she’s sucking his cock and then he’s fucking her pussy and ass. Oh, in between, he eats her pussy, too, because Aubrey deserves it, and because she has a pussy that begs to be eaten. She has a nice, big clit.

Aubrey was born in New Zealand and now travels around the world fucking strangers for all the world to see. She enjoys fashion design, traveling and doing home renovations and describes her perfect day as “chilling with family and friends.” When she has time between fucks, of course.

“People always thought I was a wild one even when I wasn’t,” she said.

And now she is.