Billi on the Bay

Billi on the Bay 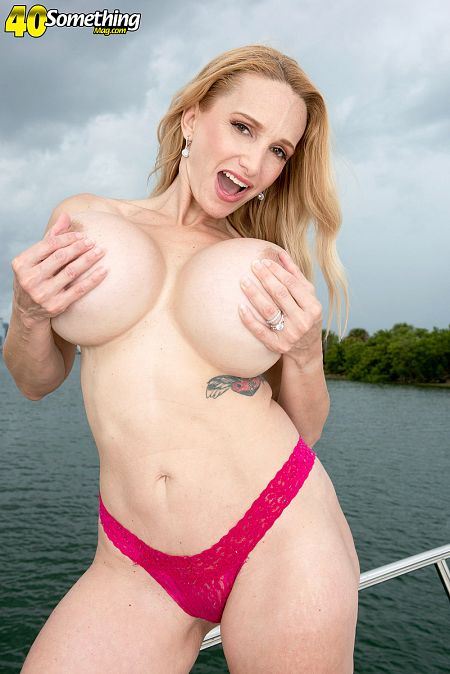 There’s a storm brewing in the sky, but there’ll be a storm brewing in your pants as you watch Billi Bardot, the 41-year-old, super-stacked mom, spending a day on Biscayne Bay. The boat is very nice, but Billi’s smokin’ body is even better. She’s wearing a white, skin-tight dress that shows off her ample curves. You’ll notice that she’s bootylicious, too. With downtown Miami, Florida in the background, Billi pours water over her dress, making it sheer, strips naked and fingers herself on the boat’s deck. The passersby got quite a show. This scene was shot the same day as Billi’s fuck scene with Oliver on the same boat.

40SomethingMag: What did you think about having sex out in the open where people could watch?
Billi: It was a lot of fun. Beyond that, I was so into the guy I was having sex with that I didn’t really notice those people

Billi used to be a stripper.

40SomethingMag: What makes you a Carolina girl?
Billi: Well, I was born and raised there. I moved away and relocated back to North Carolina, so that’s what’s in me.

40SomethingMag: So, Billi, how dirty do you get when you’re dirt-bike riding?
Billi: Pretty damn dirty! I usually require a shower when I’m done. Lots of mud. I get muddy on-purpose. It’s fun!