Blast from the past: Lucy Holland, air hooker

Blast from the past: Lucy Holland, air hooker 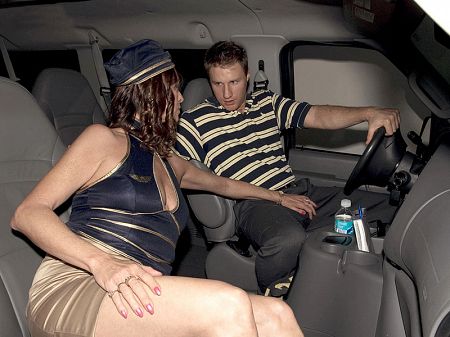 “I’m just a small-town housewife who wants to have a little fun,” 47-year-old Lucy Holland told us when she came to 40SomethingMag.com in 2008. “Everybody needs to let their wild side out once in a while.”

Lucy, a housewife and office manager from rural Georgia, let her wild side come out for us in three hardcore scenes, two at 40SomethingMag.com and one, a couple of years later, at 50PlusMILFs.com. This scene, in which she’s a sexy flight attendant who brings the Mile High Club down to earth, is one of them.

As part of our effort to keep you entertained while you’re stuck at home, we’re ramping up our schedule of postings by bringing you great scenes from our past, remastered in HD. In some cases, this is the first time these scenes have been available on 40SomethingMag.com in streaming format.

Lucy told us how her children reacted when she came home one day with a tattoo on her left breast.

“I could tell they were outraged, but they didn’t say anything,” she said. “They don’t know about the next two things I did, of course. Very few people do.”

First: In the middle of what she called “an outrageous period of horniness,” Lucy surprised her husband by getting her nipples pierced.

“He reacted to that with the biggest, longest hard-on I’ve ever seen. It was like one of those four-hour Viagra hard-ons. Once that happened, piercing my clit was a no-brainer.” Which, of course, was the second wild and crazy thing she did.

Then there was the third: sucking and fucking for all the world to see at 40SomethingMag.com.

In this scene, Lucy is a flight attendant who’s hired a driver to take her to the airport. Being a little young, a little immature and a little stupid, he asks her if she’s a “mile-high waitress.” Say what?

“I have friends who have met air hookers, if you will,” he says, digging himself into a deeper hole. “I’ve heard you go into the cockpit and maybe flirt with the pilot a little bit and do some extras and I was wondering if that could be the case with you?”