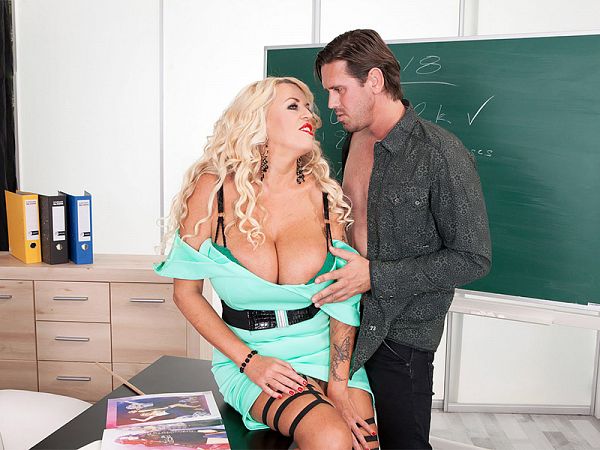 Looking hotter, sexier and a lot bustier than any boss we’ve ever seen, 53-year-old Shannon Blue calls in her young employee, Tom, for a meeting. She’s wearing a blue dress that’s tight only because Shannon’s huge tits are making it tight, and she’s showing a lot of cleavage, not that she has a choice.

Shannon asks Tom about his figures. He’s more interested in her figure, especially when she bends over. They talk about business. Frankly, what they’re talking about isn’t very interesting. What’s interesting is Shannon’s body.

“Come closer and have a look,” she says.

She means a look at the documents. At least we think that’s what she means.

Tom has a look. He also blatantly checks out her tits and grabs her ass. Pretty ballsy, if you ask us.

“You’re very cheeky,” she says in her sexy British accent.

Is Tom about to get the pink slip?

“I didn’t realize my employees were so sexy,” she adds.

Nope. He’s about to get Shannon’s pink pussy.

Shannon first came to our attention in 2017, when the UK tabloids made a big deal out of her using part of her divorce settlement to get bigger tits. We didn’t think that was so shocking; a lot of MILFs divorce and get bigger tits. But the UK tabloids thought it was a big deal, so we got in touch with Shannon, and before long, we had her in our studio, sucking and fucking on-camera for the first time.

“I was very thin when I was younger and I had very small, perky breasts,” Shannon said. “I played hockey and tennis in school. I always wanted huge boobs and now I have them. I admire women with very big chests. I get a lot of attention now from males. I enjoy it, but it’s all just fun.”

Shannon also said, “I have three children and one grandson, so I suppose I am a GILF.”