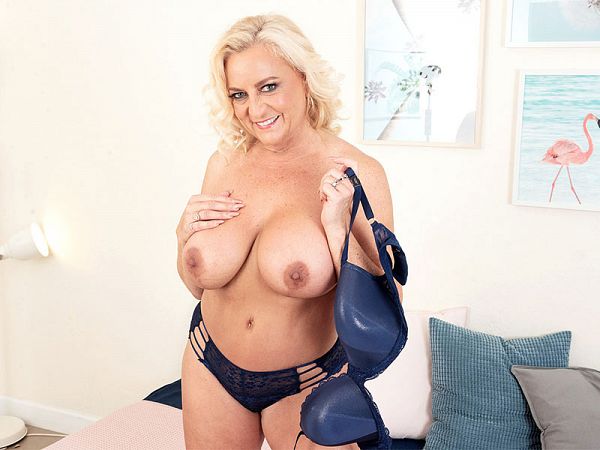 Charli Adams, a 56-year-old wife, mom and event planner from Connecticut shows off her big tits, deep-fingers her soaking-wet pussy and encourages you to jack off to her.

“So I see by the size of your pants growing that you don’t want to go out any longer?” she says. “Hmmm…I got all dressed up for you. Are you sure you’d rather stay inside? I guess I’m okay with that. What do you think we could do? So many choices.”

50PlusMILFs: Hi, Charli. So, you and I were talking before, and you told me you were raised as a Mormon and were married to Mormon men.

Charli: I was very conservative. I didn’t know anything other than the way I was raised. Missionary position. Sex maybe once a week. Every husband I had was the same way. Nothing out of the norm. They didn’t try anything, and it was frustrating to me because I just knew, “There’s gotta be more to this.”

50Plus MILFs: I’m guessing your ex-husband never ate your pussy?

Charli: My last husband wouldn’t even touch me there. He didn’t go down on me once the entire marriage. I was dying. He really enjoyed blow jobs, but he wouldn’t go down on me, so I looked for it somewhere else, and I cheated. I didn’t even own a toy until after my last divorce. You didn’t do that in the Mormon community. I did do blow jobs, and I knew they liked it, but I had weird husbands, I guess. They felt guilty, they felt dirty.

50Plus MILFs: So what did you do about it?

Charli: Well, Iâ€ˆcheated, and then I got divorced, and that’s when things changed. Because once I got into the lifestyle and realized how freeing it was to have raw, passionate sex, I was like a deer in the headlights, like, “Wow, this can really happen!” And I went to a lot of parties and I just had a blast. I couldn’t believe how fun it was. The first swingers party I went to, I was with a date who watched me get fucked by five different guys. I was hooked after that. So when I met the man I’m married to now, he opened me up to a whole new world of fun. He’s as much of a sex addict as I am.

50Plus MILFs: How did you end up here?

Charli: From camming. I had several followers suggest I do more than what I was doing. And my husband, who had heard of you guys, said, “You really need to do this.” I think I was always this way, but I had to hide it until I met a man who brought it out of me. He let me out of my cage, and I don’t want to get back in.