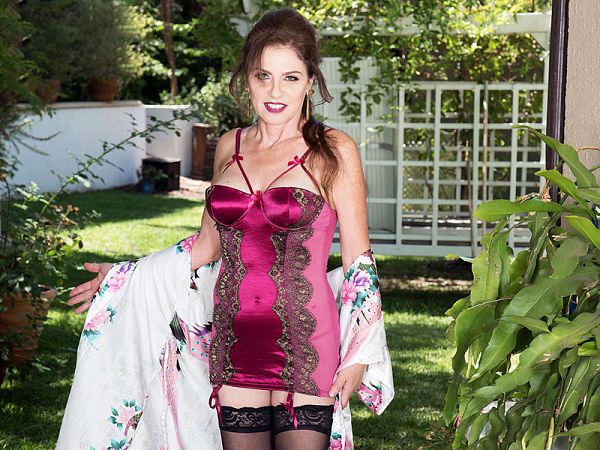 When the scene opens, Cashmere notices she has a leaky ceiling. She calls her best friend, but bestie’s husband isn’t home so she sends over her son instead.

“That could be great,” Cashmere says.

It could. Especially when Cashmere answers the door while wearing sexy lingerie and stockings.

“So you can help me out, your mom says?” Cashmere says to Donnie.

He can but not in the way Cashmere’s friend was expecting.

“I had never done anything like this before. Never modeled in my life. I’m a newbie!” Cashmere said.

But she’s obviously not new to sucking and fucking cock. She is 58, after all. And she does have kids.

We asked Cashmere if her life changed after her divorce, and she said, “Quite a lot after being with the same person for that long. The first time another man kissed me, I was shocked because he brought out this passion in me that I didn’t know was there anymore, and when you’re older, you have a little fear. So I started having sex with different people, and I really enjoyed it. I’ve learned a lot. I’ve done more things now sexually than I had in the previous 25 years. It’s a liberating experience. It’s an empowering experience.”

See More of Cashmere at 50PLUSMILFS.COM!