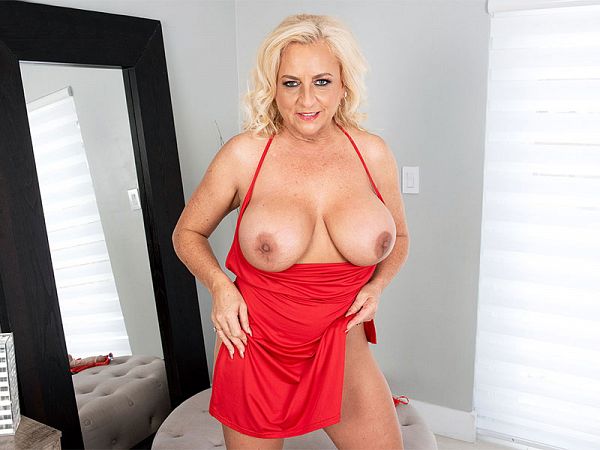 When this video opens, Charli Adams is standing in a bedroom. The 56-year-old wife, mother and grandmother from Idaho is wearing a short, tight, red dress that shows a lot of cleavage; her tits are DDD-cups, and they’re on display.

“Nice of you to join me,” she says in her soft, sultry, sexy voice. This woman would be great at phone sex. “I thought maybe we could talk for a while.”

“I’m new at this, so forgive me if I seem a little like I don’t know what I’m doing,” she says. “But you guys will be patient with me, won’t you?”

Sure. Now get your tits out!

Ooops. Sorry about that.

“Do you like my dress? I’ve been told I look good in red. Goes with my blond hair. Matches my big tits, don’t you think? If you were in the room with me right now, what would you do with me?”

Well, we’ve got our cocks out, so that’s a start.

The camera zooms in for a tour of Charli’s luscious body. Nice tits. Nice ass. Nice legs. Then Charli takes out a few toys: a small one and a big one. She lies back and rubs the big toy against her big clit.

Clearly, Charli has come a long way from her life as a Mormon wife married to a guy who was wound a bit too tight.

“I was very conservative,” Charli said. “I didn’t know anything other than the way I was raised. Missionary position. Sex maybe once a week. Every husband I had was the same way. Nothing out of the norm. They didn’t try anything, and it was frustrating to me because I just knew, ‘There’s gotta be more to this.'”

There’s a lot more to Charli, and here she is.