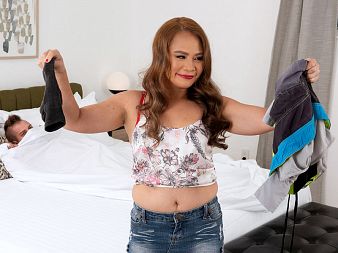 “My family and friends would definitely be surprised to see me here,” Kim Kreme said. “I’m usually conservative around people I know.”

She’s not conservative in this scene. The 41-year-old Filipino wife and mom is cleaning some dude’s house when she finds the guy’s son in his bedroom, jacking off under the sheets. Kim notices the tenting and is very intrigued. She decides she’d rather suck and fuck than clean.

Kim is a hottie.

She had sex twice in one day: once for the photo set and again for the video.

When she’s not fucking, she enjoys cooking, gardening and exercising. She’s not into sports, but if you want to watch the game, she’ll pass the time by giving you a blow job. She also said, “I dress sexy. I like to show off my body. I work hard to stay fit.”

That shows here. At the start, she’s wearing short shorts and a midriff-revealing top. Heels, too. What kind of house cleaner works in heels? One who loves to fuck!