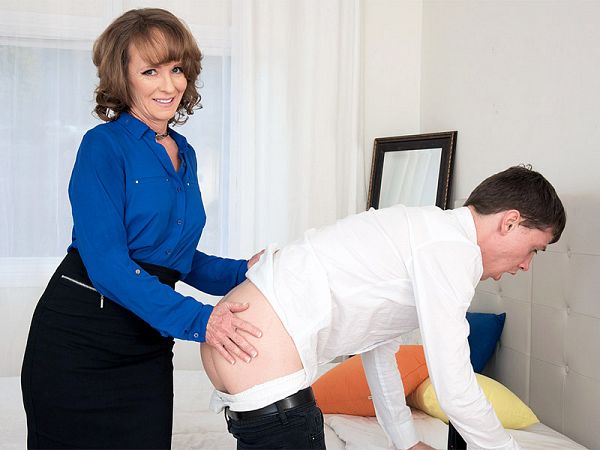 Poor Rion. He stayed over at his girlfriend’s house last night and can’t find his belt. Probably misplaced it while he was throwing off his pants so he could fuck her. So he calls his girl on his cell phone, and she suggests looking in her mother’s room. Why would it be there?

Well, while Rion is upstairs, Cyndi comes home, wearing a sexy business outfit with a short skirt. Meanwhile, Rion finds Cyndi’s pleasure chest, looks inside and discovers Cyndi’s whips and paddles and a butt plug. And then she walks in on him.

“What are you doing in here? What did you find in there?”

“Well, why don’t we go through it?” she suggests.

He picks up the paddle, and Cyndi says, “That’s for people who don’t follow rules.”

Then he picks up the butt plug.

“Do you know what that one’s for?” she asks.

He guesses wrong twice then says, “Does it go in your butt?”

“This one goes in my ass. That’s right,” she says.

Well, at this point, Cyndi, who’s 50, knows what she wants, and she no longer cares that Rion is her daughter’s boyfriend.

“Stephanie doesn’t need to know about this and neither does her father,” Cyndi says.

Cyndi gets undressed. She’s wearing little panties that barely cover her pussy. Her tits are small and perky. Her nipples are hard. She sucks his cock and balls, then she has him work the butt plug in and out of her ass. Is that a preview of what’s to come? Damn right it is because after Rion fucks Cyndi’s tight pussy, he fucks her old ass, too.

But we’re guessing that Rion is going to have a problem. Having fucked Cyndi, he’s not going to want to fuck her daughter ever again. He’s always going to want Mom.