First she kicks his ass. Then she fucks him.

First she kicks his ass. Then she fucks him. 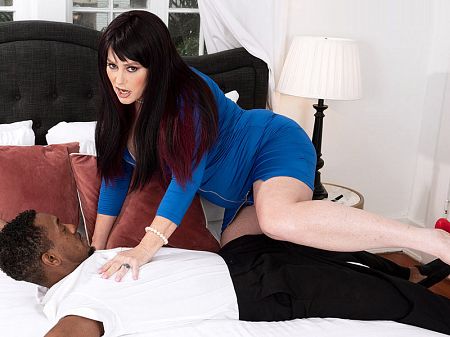 “I would like a female companion for the evening,” Jonathan says when he calls the escort service. “I like it rough. Smacking and a little choking here and there. You know, the usual.”

The usual? Nothing about this is going to be usual because his lady of the evening is Sherry Stunns, a 51-year-old divorcee and mom who has a wrestling fetish.

“Let’s go upstairs where I can fucking molest you,” Sherry says when she shows up. “I heard you wanted a dominant one.” She pushes him down onto the bed and straddles him. She stuffs her big tits in his face.

“I’m going to use your face for other things,” she says as she positions her pussy on top of his face. “Inhale that pussy.” He can barely breathe. “Have some more pussy, good boy,” she says.

She covers his face with her big ass and teases his cock, then she demonstrates some wrestling moves on the lucky guy. Did we say “lucky”?

Right about now, the line between pain and pleasure has been blurred.

“I want to put you in a camel clutch,” she decides.

Of course, Hogan vs. Sheik was nothing like this. Sherry puts Jonathan in a leg lock while he eats her pussy. She finally gives his cock and balls some attention. Then Jonathan bangs her from behind and in other positions as Sherry moans, “Fuck my cunt!”

In this scene, nobody taps out. Jonathan shoots his load all over Sherry’s big tits. She rubs it in. Jonathan has definitely gotten his money’s worth.