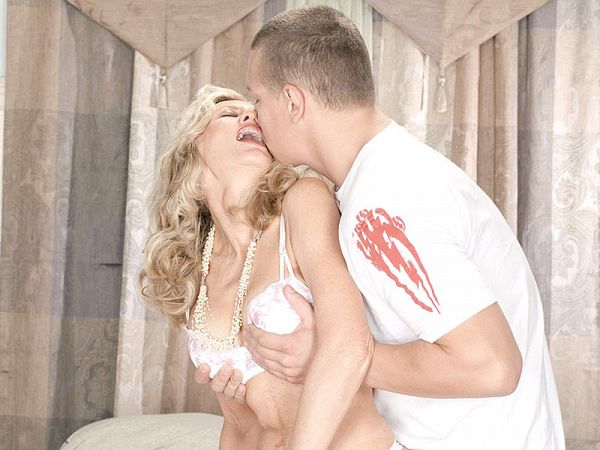 Here’s Barushka, a 56-year-old, hot-bodied mom who had never fucked on-camera until she came to our studio in 2004. Barushka starts out dressed while her dick-for-hire–who’s only 23 years old–starts out totally naked and hard. She drops to her knees and sucks his cock loudly and enthusiastically. This is great stuff from a beautiful, sexy lady who really could’ve been a pro if she’d wanted. Instead, she simply had sex on-camera a few times to help pay for her daughter’s wedding. Isn’t that a beautiful story of motherly love?

This scene has never appeared on 50PlusMILFs.com because when it was shot, 50PlusMILFs.com didn’t exist. So we’re featuring it now because Barushka was such a big hit when she debuted and also because this is a hot fuckin’ scene.

Barushka was born in Dayton, Ohio. She was living in Fort Lauderdale, Florida when this scene was shot. She measures 34-22-34 with big, fake tits that you gotta love.

Wildest sexual encounter: “In an outdoor mall with me wearing nothing under my fur coat.”

How often she has sex: “Every night.”

What she wants to do that she’s never done: “I’m doing it now!”

Barushka, if you’re out there and happen to see this scene, you should be proud: 16 years later, we’re still jacking off to you.