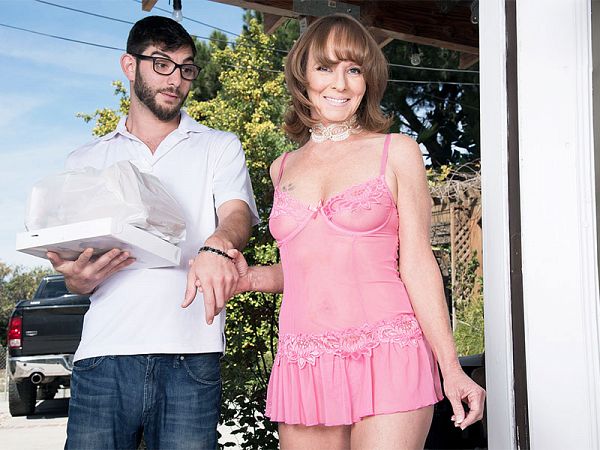 “A friend of mine named Sally D’Angelo referred me to The SCORE Group, and it all took a week from the time I first contacted you to the time Iâ€ˆcame here to California to model,” 50-year-old divorcee and mom Cyndi Sinclair said. “She told me I had the look you’re looking for, and one thing led to another.”

Thanks, Sally! She’s a woman who knows what we want, and what we want are MILFs who look like Cyndi and are ready, willing and able to fuck on-camera for all the world to see. Here, Cyndi fucks the delivery man. He’s a lot younger than her, but that’s okay. When he shows up with her pizza, Cyndi is wearing sexy lingerie (that reveals the sexy tit-too above her right breast). Before he knows it, she’s inviting him into her bedroom for some afternoon delight.

Cyndi lives in Utah with her dog. She’s had an interesting life.

“I used to be a high angle rescue trainer. That’s probably the most-fun job I’ve ever had. I traveled around the world training crews how to rescue and self-rescue from wind towers using mechanical and rope techniques. It’s very complicated, very intense. I was an environmental health and safety manager. I’ve been an office manager. I managed a medical marijuana dispensary. I’ve done a lot of interesting things.”

None more interesting and exciting than this. Take it away, Cyndi!