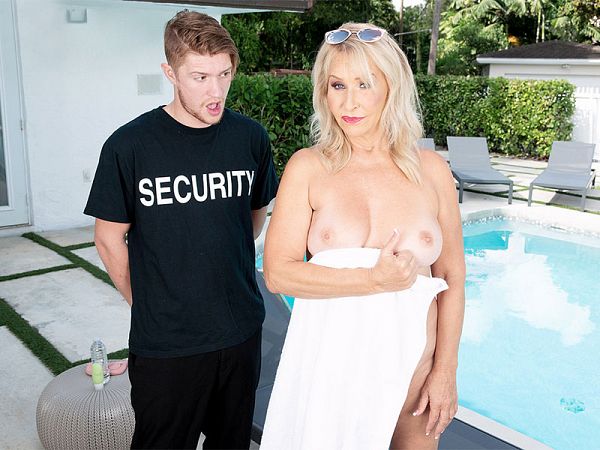 In this video, Sandy is sunbathing nude next to her backyard pool when a security guard–a very young security guard–shows up and tells her that the neighbors are complaining. Apparently, some fuddy-duds don’t like that Sandy is out there with her tits, ass and pussy exposed. It doesn’t seem to matter that she’s in a fenced-in yard and it’s her private property.

But Sandy takes the situation into her own hands. She seduces the 26-year-old security guard and sucks his cock right there in the open. Way to give the neighbors a show, Sandy! Then she takes him inside and fucks him. As first-time on-camera fucks go, this is a great one.

We asked Sandy to tell us about her wildest sexual encounter, and she said, “Maybe on a ski gondola headed up a ski slope. We had to take off our skis and ski boots.”

We’re sure it was worth it.

“And I always give head on the 7 Mile Bridge,” she said.

That’s on the Overseas Highway on the way to Key West, Florida. You might have seen it in the Arnold Scwarzenegger movie True Lies. He did not get a blow job on the 7 Mile Bridge, but that’s because his film wife was Jamie Lee Curtis. He should’ve been with Sandy.