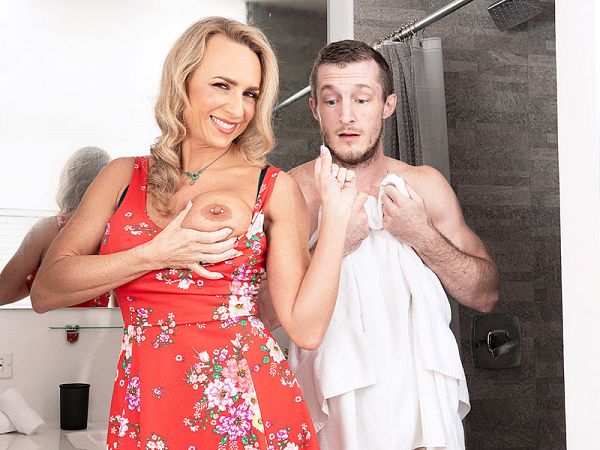 It’s morning, and Kenzi Foxx, a 50-year-old wife and mom, hears a sound coming from her son’s bathroom. She knows her son has already left for work, so she goes to investigate, and when she opens the shower curtain, she sees her son’s friend taking a shower. He freaks out when he turns and sees his best friend’s mom. He’s naked, of course, and Kenzi likes what she sees.

“What time do you have to be at work?” she asks, as if there’s nothing unusual about this.

“I’m pretty early,” he says, a little embarrassed, trying to cover up, not having much luck, about to have a lot of luck.

“Do you have some time to play?” she says.

He definitely has time for that.

What does Kenzi do to make her guy feel special?

“I’ll leave him notes in his car telling him about what I’m going to do to him later. I’ll also drop to my knees anytime, anywhere.”

The best compliment she’s ever received?

“I hear quite often how good my pussy feels.”

Judging by the load the dude shoots in this scene, it must feel really good.