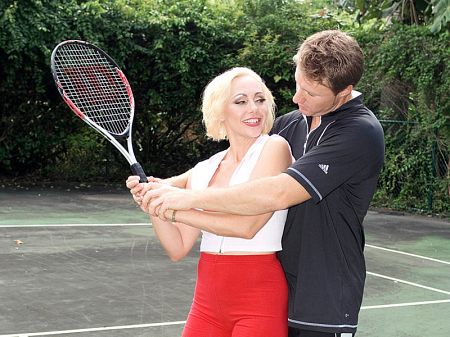 That’s for sure. In this scene, Raquel is getting a tennis lesson on an outdoor court.

“We’re going to work on your forehand and your backhand,” the tennis instructor says to her. He’s very hands-on. Why does he have to touch Raquel’s ass while he’s teaching her how to play tennis? Because it’s there. Well, her husband is there, too, at least at the start. But he has to run off and do some errands. No worries. Raquel’s in good hands.

Before long, she’s grinding her ass into his crotch and then she’s reaching back and demonstrating her backhand technique on his cock and sucking his dick right there on the tennis court. The action moves inside, where Raquel continues to give him a wet, deep blow job, then the instructor fucks her pussy and ass while she spreads her very pink cunt.

More about Raquel: Her hobbies are shopping, yoga, dancing, hiking, reading and going to wine tastings. She said, “I love Bikram yoga. Eating lots of organic veggies, meat and grains keeps me in shape.” She was born in New Jersey, lived in California for a while then moved to Chicago. Oh, and don’t think this woman was a goody-two-shoes before she started fucking on-camera. She was a stripper for 15 years.

There’s more of Raquel at 50PlusMILFs.com from when she became a brunette. We think she looks sluttier as a blonde. But either way, nobody’s complaining.