Getting to know Cora Comfort

Getting to know Cora Comfort 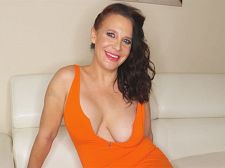 This is Cora Comfort Week at 40SomethingMag.com, and we’re kicking things off with a get-to-know-you interview. Cora is a 46-year-old divorcee from Detroit, Michigan (now living in Las Vegas), and she’s full of life and energy. She loves to fuck. She’s in the right place.

We asked Cora how she found us, and she said, “It was the craziest thing. I belong to this swinger website, and some random person was talking to me and said, ‘You have to talk to somebody at The SCORE Group,’ so I did, but they wanted the [test] pictures to be a certain way, and I had so much going on, but when I was called back, it was already happening.”

We make things happen in a hurry when we see a lady like Cora.

So here’s this week’s schedule:

Tuesday: Solo video in which Cora deep-fingers her butthole.

It’s going to be a great week…for you and Cora!