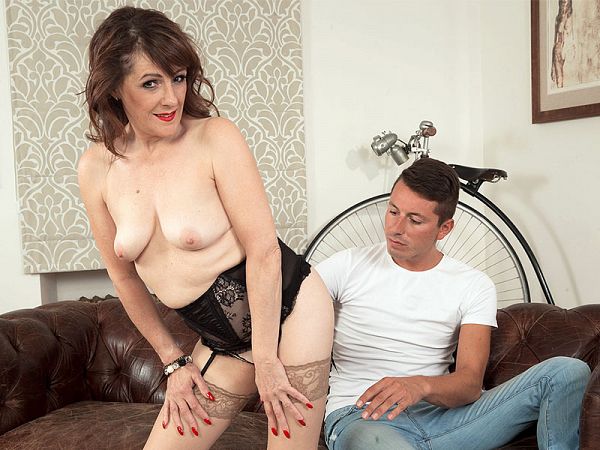 Pandora is tutoring Nick in grammar. She tells him, “It’s going to be a little bit boring, but we’ll get through it.”

Boring? The dude looks like he’s going to fall asleep as Pandora tries to teach him the difference between which and witch and their, there and they’re.

“Focus, Nick,” she tells him. “I’m only doing this as a favor to your parents. I’m not getting paid for this or doing it for the good of my health.”

Which (not witch) is exactly what happens, and before we know it, Pandora is sucking his dick, and then they’re (not there) fucking and having a great time and enjoying their (not they’re) afternoon.

Pandora is 56 and from the UK. She’s divorced and has children and grandchildren. They don’t know she’s here. She’s a swinger. The kids don’t know about that, either. Actually, Nick didn’t know about the sexy stockings and garter Pandora’s wearing until her clothes came off.

By the way, if you have thin walls, keep the sound down when watching this video. Pandora gets loud when she has a hard cock in her old cunt.