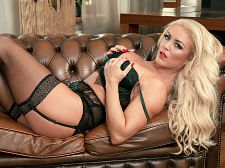 Rebecca Jane Smyth, a 46-year-old hottie from London, England, gives her pussy a workout in her first video at 40SomethingMag.com. She stretches out her pussy by stuffing two fingers inside and also shows off her delightful ass, the same ass that’s going to get fucked tomorrow and Thursday.

“I’m a nymphomanic,” Rebecca Jane says in the post-wank interview. “I get fucked all day but I still wank at night.”

When this video opens, Rebecca Jane is lying on a couch, wearing a tight dress. She runs her hands over her body and shows off her stockinged legs and fuck-me pumps. Then she does a slow strip, showing us her nice, firm tits before working her way down to her pussy. She dips two fingers inside, and one of the best parts of this scene is when Rebecca Jane squats over her fingers and fucks them like they’re a dick.

Rebecca Jane’s message to you: “Happy wanking over me! Bring it on!”