Jadan Snow cheats on her husband

Jadan Snow cheats on her husband 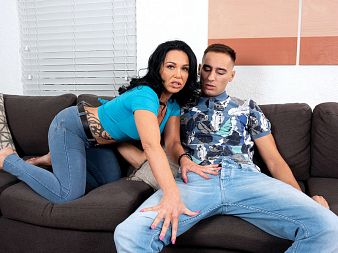 No sooner is Jadan Snow‘s husband out the door than she picks up her phone and calls her fuck buddy.

Damn fool husband, leaving a hot piece of ass like Jadan, dressed in tight jeans and a midriff-revealing top, high and dry. Milan is barely in the house when she reaches down and grabs his crotch. Jadan knows what she wants, and it’s not conversation. It’s not romance, either. She pulls him to the couch, takes out his cock and sucks it.

“I’ve been craving it for so long,” she says before eagerly downing his boner.

Said Jadan, “I like to be watched while having sex. That’s my fetish.”