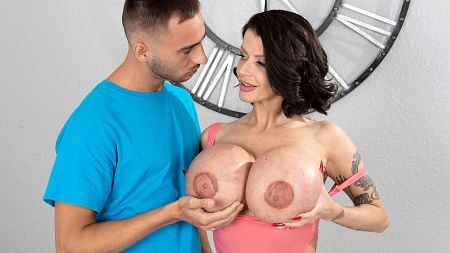 Joslyn James comes home from shopping and shows her guy what she got. Her huge tits? Well, those, too, but not this time. She definitely didn’t buy a bra; her tits are poking through her sheer top. But Milan’s eyes aren’t on her tits. They’re on her ass, which is also big and round.

“I know you’re such a butt man,” she tells him, “but after this outfit, I’m going to convert you to a titty man.”

That shouldn’t take long, although Milan’s hands and tongue go right for her ass. And Joslyn is obviously a cock lady because she gets down on her knees to suck it. But before long, Milan is fucking her gigantic rack, which, we should point out, was not nearly as big when golfer Tiger Woods was (should we say allegedly?) fucking her back in 2009. Her pussy, which Milan also fucks, is tight as ever, and can you guess where he shoots his load? We won’t spoil the ending. See for yourself.

Joslyn is a former teacher. She was relatively flat-chested when she was younger, which, she says, “is why I bought these!” We always say big tits are an excellent investment. She wasn’t nearly this busty when she was fucking golfer Tiger Woods back in the late 2000s.

What she wants to try that she’s never done: fly fishing and crabbing.

Fetishes: “I’m down for the mommy play.”

Is she sexually assertive or passive? “I’m always in charge.”