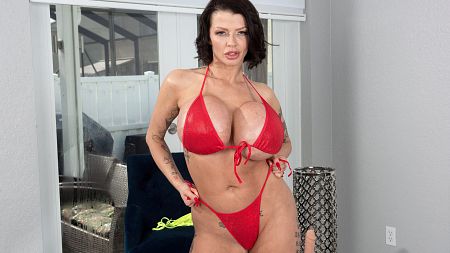 We have to give Tiger a lot of credit for good taste in women (and Joslyn wasn’t nearly as busty then as she is now). But Tiger isn’t the only interesting part of Joslyn’s past. After graduating college, she became a teacher.

Joslyn enjoys playing volleyball, tennis and basketball. Her hobbies are cooking and baking. Among her special talents: “I’m double-jointed.” She has appeared on such television shows as Dr. 90210, Gene Simmons Family Jewels, The World Series of Poker and Inside Edition.

Today, Joslyn models a collection of micro-bikinis and uses a big toy on her pussy and clit. Later this week, she’s going to fuck. No, not Tiger. Somehow, we think he’d no longer measure up.