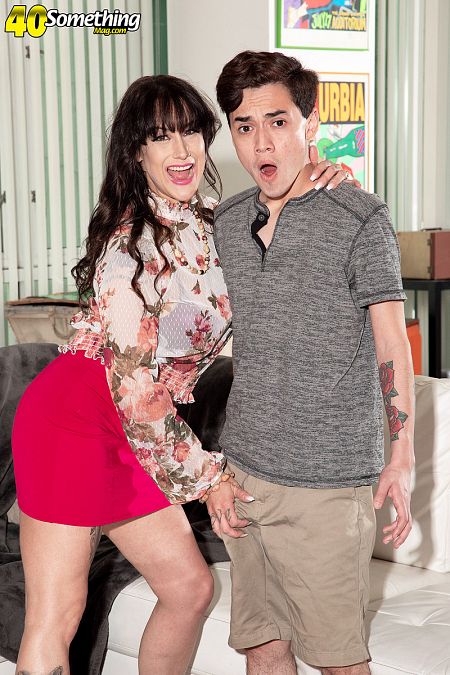 When we asked 42-year-old Kali Ryder to tell us the wildest thing she’s ever done, she said, “Me and my husband went to a swingers club in Vegas, and while I was sucking his friend’s cock, a bunch of guys were taking turns on me.”

That’s pretty hot. What goes on in these photos is very hot as Kali sucks and fucks her daughter’s boyfriend, who just happens to be big-dicked Juan “El Caballo” Loco. Juan is 21 but looks 18, at most, and the way he stretches out Kali’s mouth and pussy is something to be seen. So is the load he leaves in Kali’s pussy after he’s been fucking her in the missionary position. In the video, the creampie comes after they’ve been fucking doggy style. Why the difference? Because we don’t shoot the photos and videos at the same time. Kali and Juan fucked twice on this day, and they both enjoyed it a whole lot.

She’s attracted to men with outgoing personalities and a lot of energy.

Favorite positions: “All of them as long as there’s plenty of pleasing going on.”

She told us she’s “had sex with a midget. Is that politically correct? He lets me call him that. I guess little person is the right thing to say.”

Whatever. Nobody’s thinking about being PC when they’re fucking Kali.