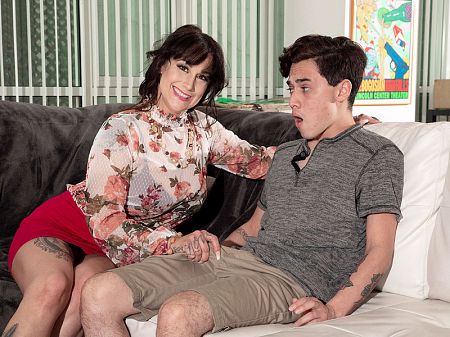 A boring day around the house, cooking and cleaning, becomes much more exciting for 42-year-old Kali Ryder when her daughter’s boyfriend shows up. He’s Juan “El Caballo” Loco. Juan, who looks like a kid, doesn’t seem disappointed when Ms. Ryder tells him that Pam, her daughter, won’t be home for a while. He’s happy to just sit and talk with Ms. Ryder. She’s a cool mom.

Kali is intrigued by Juan’s tattoos. It quickly becomes an “I’ll show you mine if you show me yours” situation. She shows Juan her tattoos. All of them, including the one on her stomach and the ones on her back. He shows her the one on his chest. She wants a better view of it and has him take off his shirt. By this time, her leg is draped over his. Then her hand wanders down to his crotch.

“Miss Ryder, I don’t think we should be going down there. I’m dating your daughter.”