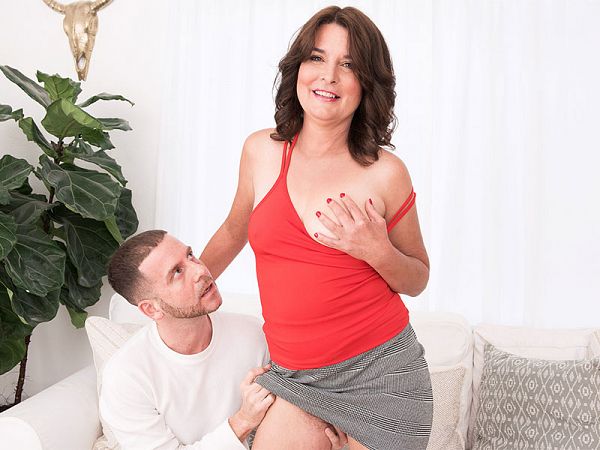 “Most women are so shaved,” 54-year-old first-timer Kelly Scott said. “They don’t realize that women have hair down there. When I was growing up, nobody was shaved. People want something that’s different. Besides, I don’t want to look like a little kid.”

We asked Kelly if the people she knows would be surprised to see her here, and she said, “Yes and no. My grandkids I probably wouldn’t tell, but I don’t think my kids would be that surprised. I wouldn’t volunteer it, but if they found out, they would say, ‘Yeah, I can see Mom doing that.’ I’m old enough to know what I want, and I don’t have to worry about things.”

“I don’t look my age, so guys from 20something to 70something ask me out,” she said.

Kelly told us two things about her pussy: the hair on it is soft, and her pussy itself is tight. Nonetheless, Tony manages to get his big dick in and deep, and Kelly enjoys it.

“My most-fun job is bartending. I like the attention and being in the middle of the event.”

She’s a fan of the Dallas Cowboys.

She likes open-minded men who can carry on a conversation.

She has three daughters and seven grandchildren.

She used to be a firefighter. She’s been to a few swingers clubs. She likes to mow her lawn topless.

Obviously, she doesn’t like to mow her pussy at all. And that’s fine by us.