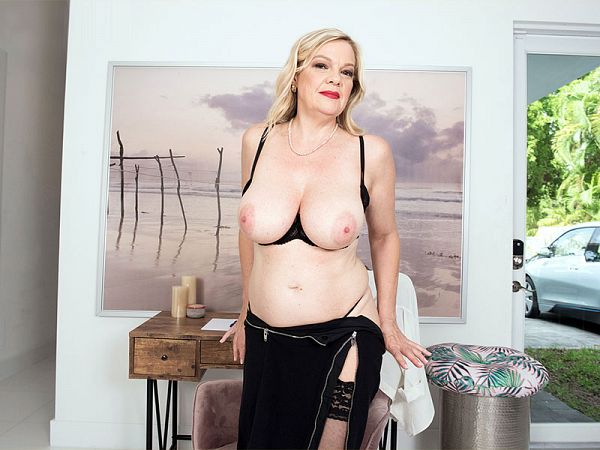 Lena Lewis, who’s 54 and from Germany, has just come home from work and is talking to her son’s friend, who came over to help her move a couch.

“Can’t we do this another time?” says Lena, who obviously has other things on her mind. “Are you looking at my cleavage? Jimmy, that’s not right. I’m your best friend’s mother.”

But that doesn’t stop her. Within seconds, Lena is unbuttoning her blouse so he–and we–can see her big tits.

“If we continue with this, it has to stay a secret,” she says. “You won’t tell anyone?”

Nope. Nobody but every single 50PlusMILFs.com member.

Before long, Lena’s big tits are out of her black bra. We get to see her long legs in sexy stockings and her ass. And then she lies back and plays with her tits and pussy.

We never actually see Jimmy, but you can imagine that while watching Lena, he’s doing exactly what you’re doing.