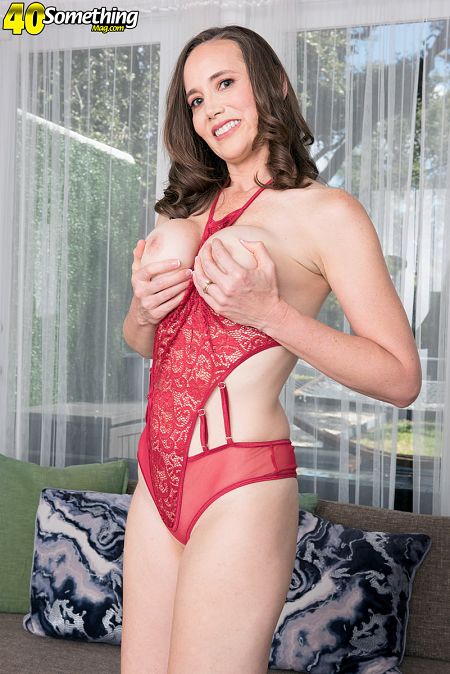 Proving once again that a woman is never too old to play with toys, 46-year-old wife and mom Lilly James makes herself air-tight with a variety of play-things. When this scene opens, she’s wearing sexy, lacy, red lingerie that doesn’t cover much of her hot body. She’s running her hands over her body, then she gets naked and buzzes her clit with an old-fashioned vibrator–you know, one of those big ones–that has an interesting attachment. She slides a butt-plug into her ass (which has been fucked at 40SomethingMag.com) and then makes herself air-tight with three toys: one in her mouth, one in her pussy, one in her ass.

Lilly definitely enjoyed her time in our studio.

Lilly was discovered by one of our studs. Hey, that’s one way to get into a hot MILF’s panties.

“I’m more sexual than I was when I was younger. I don’t know what happened. I just enjoy it a lot. I like to have sex a lot.

“People I know would be surprised to see me here because I’m usually very quiet. I’m very conservative. They’d be very, very surprised.”

Lilly is a clinical medical laboratory scientist. She used to be a respiratory therapist. She was born in Michigan and lives with her hubby in Houston, Texas.

Like we said, a woman is never too old to play with toys.