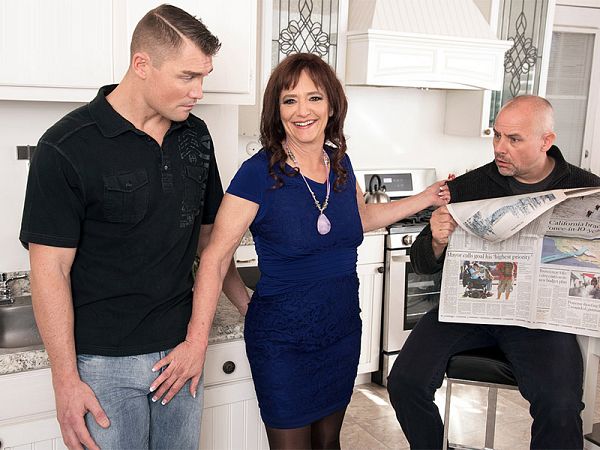 Whinny Spice, who’s 52 years old, has been out all night. Her guy is sitting at home, all worried, but he needn’t have been concerned. Whinny is in good hands. She comes home with a nice guy she met at the club and fucks him in front of her hubby. Is that a nice thing to do? It is if you’re Whinny or the guy, who’s young enough to be her son.

“I have not had any really wild experiences, but the night I met my favorite guy was pretty amazing,” she said.”We met at a club. I noticed him as soon as he drove up on his bike, so I was watching him. A little later, I ended up sitting next to him in the smokers’ circle. We started talking, hit it off, went inside and ended up playing, first in the couples room and then in the safari room.”

The safari room, where they went at it like wild animals.

“I love to be taken from behind,” Whinny said. “My breasts are very sensitive, so I like a lot of attention paid to them.”

Whinny is usually sexually assertive, but she can also be submissive, depending on the situation.

“I generally prefer him to initiate sex,” she said, “but I can and have on occasion made the first move.”