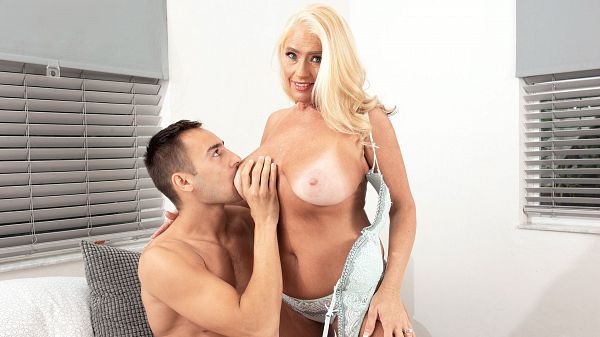 Maddie Cross, a 55-year-old wife and mom, has a surprise for her loving husband.

“Hi, honey,” Maddie says to the camera, her big, tan-lined tits pouring out of her bra. “You should see what I picked up today. I got this young, hot stud. He’s gonna fuck me in so many positions, and you’re going to get to watch and you’re going to love that.”

And you’re going to get to watch along with him as Maddie makes her worldwide hardcore debut by sucking and fucking Milan’s 27-year-old cock.

“It’s very flattering to know that I turn on younger guys,” said Maddie, who very obviously has Milan turned-on.

Maddie told us about one of her favorite experiences with a younger man. Naturally, it involved her husband, too.

“We picked up a young guy,” said Maddie, who lives in North Dakota. “He was a college student. We met him somewhere, and my husband has a big Chevy Duramax with four doors, so we picked this guy up, and this young stud and I got in the back of the truck and we were having sex, and the whole time, my husband was driving us all around town. It was pretty cool. We had a lot of fun with him.”