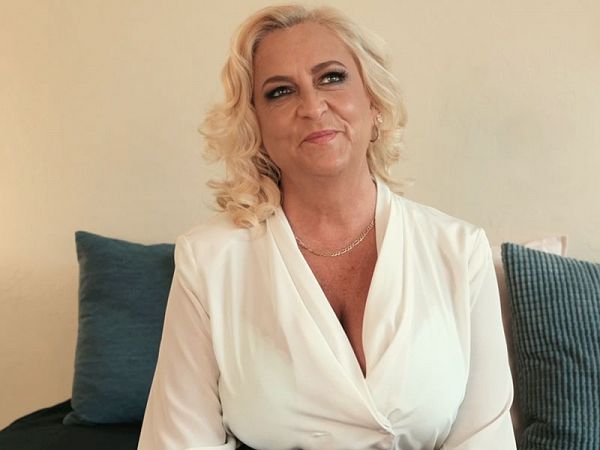 It’s time to get to know Charli Adams, a 56-year-old swinging wife from Idaho who lives in Connecticut. Today, an interview. Tomorrow, photos of Charli fucking on-camera for the first time, and it’s with a guy who’s easily young enough to be her son. And Thursday, the video.

Charli used to be a Mormon.

Yeah, you read that right. A Mormon. She talks about it in the interview.

Put it this way: Not a lot of Mormon women end up having sex on-camera.

“I was very conservative,” Charli said. “I didn’t know anything other than the way I was raised. Missionary position. Sex maybe once a week. Every husband I had was the same way. Nothing out of the norm. They didn’t try anything, and it was frustrating to me because I just knew, ‘There’s gotta be more to this.'”

She found how how much more after her last divorce. And her new husband…well, he has no intention of keeping her sexual urges under wraps.

“Once I got into the lifestyle and realized how freeing it was to have raw, passionate sex, I was like a deer in the headlights, like, ‘Wow, this can really happen.'” she said. “And I went to a lot of parties and I just had a blast. I couldn’t believe how fun it was. So when I met my husband now, he opened me up to a whole new world of fun.”

Her coming to 50PlusMILFs.com is part of that new world. So is showing off her big tits, which she loves to do. Charli is a hot blonde with a very sexy body. You’re gonna love her.

Charli is a mother of four boys and a grandmother of three. She says her family would be very surprised to see her here. Her friends? “Not so much.”

She’s an event planner. She’s also been a secretary and a real estate agent.

Kinkiest sexual encounters: “Probably the two gang bangs my husband arranged for me.”

Watch the video and let Charli tell you all about it.