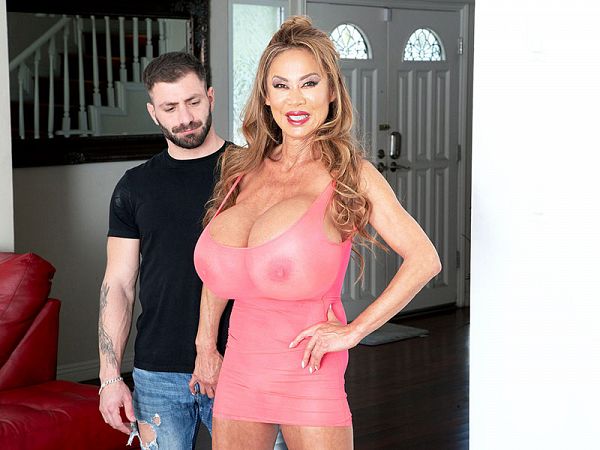 Now for a lady whose appearance here is long overdue: Minka, the world’s bustiest Asian, one of the greatest big-boob models of all-time, makes her 50PlusMILFs.com debut. She hears a knock on the door, so she answers it. It’s her daughter’s boyfriend, Jason, who’s looking for his girlfriend, who happens to be Minka’s daughter

But Minka’s daughter isn’t home, so she leads Jason to the couch to wait for her. Before long, her hands are wandering over his crotch and his hands are all over her tits. WARNING TO DAUGHTERS OF BIG-TITTED MOMS: Do not leave your boyfriend alone with your mom!

Minka lives in Las Vegas, where she spends most of her free time playing tennis. She’s an excellent tennis player, which partly explains how she has remained in such great shape.

Minka told us how she got into adult modeling back in 1994.

“One day, I was playing in the Asian Olympic Games in Chicago, and my friend–she’s a plastic surgeon–and I were showering together and she said to me, ‘Why don’t you get into men’s magazines? Don’t teach tennis. How much money can you make teaching tennis?’

“I didn’t even know about the magazines. I had never seen them. I sent three Polaroid pictures to SCORE. In all the pictures, I had a natural smile on my face.

Over the years, Minka super-sized gradually. Today, her tits measure 44KK. One day, she’ll be a member of the SCORE Big-Boob Hall of Fame, but that day seems like it’s still a long way off. As this scene proves, she’s still going strong.

See More of Minka at 50PLUSMILFS.COM!