Mom gets ass-fucked by the pool boy

Mom gets ass-fucked by the pool boy 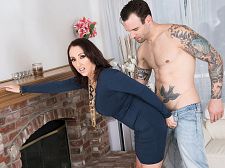 Missy Masters, a 48-year-old divorcee and mom from Las Vegas (born in Massachusetts), is hot. Missy, who has big tits and a big, round ass, is always hot, but today, she’s hot for the pool boy. She’s dressed for a party with her girlfriends, but she’s also dressed to impress cocks with a tight, curve-hugging dress that shows plenty of cleavage.

“I can only imagine what size that dick is, but I want to find out,” she tells her girlfriend over the phone. “I might even let him slide it into that ass.”

Missy hangs up the phone and goes outside to retrieve Alex, who’s busy working on the pool.

It’s about to get hotter inside. Missy’s all hands, and she wastes no time before she takes his cock out and strokes it and sucks it. Alex returns the favor by eating her wet, pink pussy, and then he slides his dick deep inside. Missy gets fucked in a lot of positions that show off her ass because she knows that’s what we want to see. And then she invites Alex to stick his dick in her asshole, an invitation he can’t resist.

So let that idea roll around your head while you’re watching Missy getting ass-fucked: She has kids at home who have no idea that Mom is doing this.