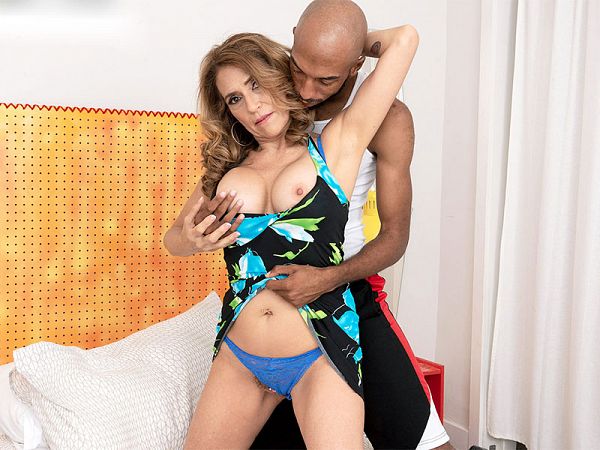 Melissa is clearly enjoying herself. Then she notices that someone is watching her from the door frame. It’s John, her son’s 23-year-old friend.

“How long have you been standing there?” she asks.

“Uh, your son said it would be okay for me to come take a shower after the gym,” John explains.

“How long have you been standing there? You’ve been spying on me, haven’t you? You little perv.”

He tries to explain himself, but she doesn’t want to hear explanations.

So he does. He whips out his big, black cock, and she encourages him by spreading her pussy and talking dirty and then taking his cock in her mouth. Then they fuck. Mrs. Johnson gets her tight, pierced pussy fucked every which way by her son’s big-cocked friend, then she sucks him off a little more until he shoots his load in her mouth and all over her face.

After Melissa shot this scene, she posted a photo of herself and John on Twitter and wrote, “Another fun day @scoreland, this time with sexy, young John Long! My youngest fuck ever…for now, hehehe!”

Her previous youngest was 29, last year.

“My friend’s nephew,” she said.

Clearly, Mrs. Johnson doesn’t care about the traditional taboos. That’s fine by us.