Mrs. Storm and her ex-student

Mrs. Storm and her ex-student 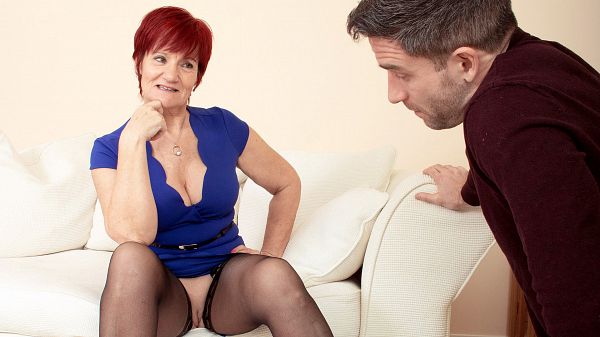 Linda Storm, a 63-year-old wife, mother and grandmother from Hertfordshire in southern England, answers the door and finds her daughter’s boyfriend standing there. Her daughter is out shopping, so she invites him in. They immediately recognize each other: Mrs. Storm was his former teacher; Alexei was her former student.

“You didn’t know I was her mother, obviously,” she says, sitting on the couch in a short dress, legs slightly parted, wearing stockings and heels.

“No. I was quite surprised to see you at the door,” he says.

Then he comments on her dress, which seems to be creeping up her legs, exposing more leg and more…well, you’ll see.

“You were my teacher crush,” he admits. “All the boys used to talk about you. We used to try to get you to bend over at the blackboard.”

“I knew what you boys were up to,” she says. “It was quite exciting.”

Well, by now, he can see right up her skirt, and guess what? She’s not wearing panties! Bad teacher!

Is this the kind of thing you can expect to happen when you encounter that former teacher you had a crush on? No. But it might happen. A guy can always dream.