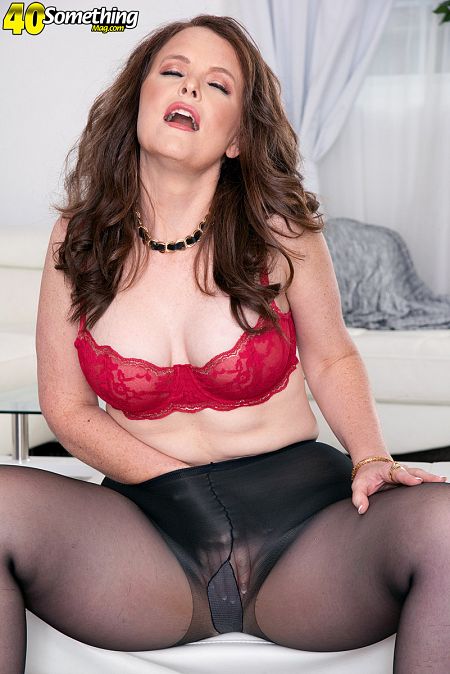 In these photos, Rose Mastos, a 44-year-old wife, mother and grandmother from Colorado, tears open her pantyhose so she can get at her pussy. Rose is a voluptuous redhead with a big, round ass. She’s a swinger, too, but she had never modeled or fucked on-camera until she came to us.

40Something: Have you had full-on sex with a woman yet?

Rose: Yes. There’s also a thing called the pillow princess where the girl likes to have another girl go down on her but she doesn’t want to go down on another girl. But I’m not that way. I’ll go down on the other girl. I like to give people pleasure.

40Something: You’ve had sex with another guy in front your husband?

Rose: Yes. I was with this one guy, and threesomes don’t really work very well because the other guy takes over. So then my husband was literally just sitting there watching and he got bored. The other guy was going at me for like 45 minutes. I was having a great time.

40Something: Do you have any advice for guys who want to go to the club but as a single?

Rose: Just be friendly and don’t be pushy. I have this one friend, he’s single. He’s been going a long time and he’s kind of got it down because he’s just friendly with everybody. He doesn’t expect anything and he’s very patient. I’ve actually played with him a couple of times. I know he would love to play with me again, but like I said, he’s patient. You can flirt and compliment the women, but if you get the evil eye from her husband, then back off.

Rose: Yes. I use vibrators. Sometimes it takes a while, but once I have my first big orgasm, I am very convulsive. Then I have multiple orgasms. One time I had sex and then masturbated and had 30 orgasms in an hour. Yes, 30. I counted!