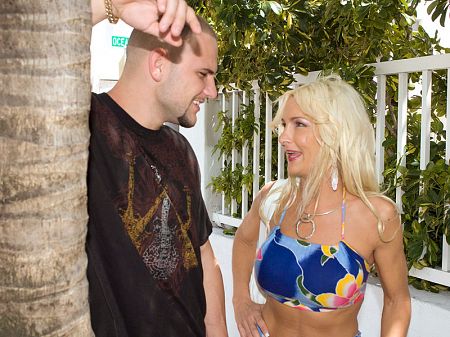 This scene of 40-year-old Brianna Wildman sucking and fucking JMac is a favorite of your 40SomethingMag.com editor. Here, we present it remastered in HD for the first time.

The plot: Brianna, standing on a street corner in Miami, Florida, dressed like a hooker but actually on her way to a band convention, can’t find her way. She runs into JMac, who tells her the convention ended an hour ago. But he invites her up to his place for a personal audition.

Two things in particular stand out about this scene and make it memorable:

• Brianna’s audition consists of giving JMac a blow job while singing between sucks. Brianna, who lives in Las Vegas, is a real-life singer and dance instructor.

• At 15:50, Brianna lies on her back, spreads her legs and gets fucked in the missionary position. The view is between JMac’s legs (what SCORE Group founder John Fox used to call “the tunnel view”) as he bottoms out in her cunt and uses it as his personal toy. Brianna’s pussy, which is small and tight, really has to stretch to accommodate JMac’s rod, and we see how it’s gripping it. Meanwhile, she’s looking down at her pussy, seemingly unable to believe that her pussy (which had never been fucked on-camera before she came to our studio) could take so much cock.

“I felt like my pussy couldn’t stretch anymore,” she said after she’d been thoroughly fucked. “Wow, that cock was so good!”

Brianna, a little woman at 5’2″, 106 pounds, told us she dresses like she’s dressed here all the time. Why?

Well, honestly, Brianna, in this video, a lot of us will be focused on your cock-filled cunt.