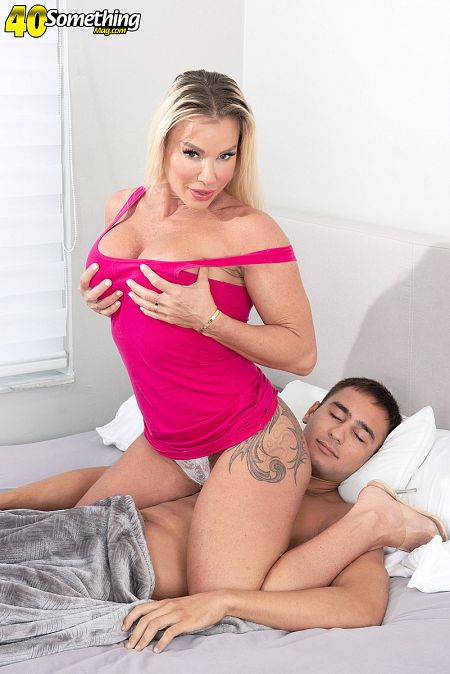 Is it wrong for a woman to have a crush on her son’s best friend? Is it wrong for her to want to sit on his face and suck and get fucked by his cock? After all, this guy is the same age as her son. Certainly, such behavior is not in tune with society’s norms.

But, hey, what’s a woman to do when her hubby isn’t giving her what she wants and her son’s friend is sleeping over, big cock and all? Well, in 46-year-old Robbin Banks’ case, what she does is sit on his face while he’s sleeping.

“What are you doing?” he asks, roused from his early-morning slumber.

Damn right he should. After all, how often do you wake up and have Playboy ass in your face?

“Good morning,” she says. “Why don’t you eat something? You must be hungry.”

Robbin, who’s from England, is a former Playboy model who, known as Zoe Gregory, was one of Hugh Hefner’s girlfriends for a time. She also got some attention when she came out and said that baseball star Alex Rodiguez had hit on her before proposing to J-Lo. We have to admire A-Rod for having good taste, although his rod did not make it into Robbin’s pussy. Too bad for him. Robbin now lives in Fort Lauderdale, Florida. She likes going to the beach, working out, traveling and eating out.

Eating out, eh? We can see that.