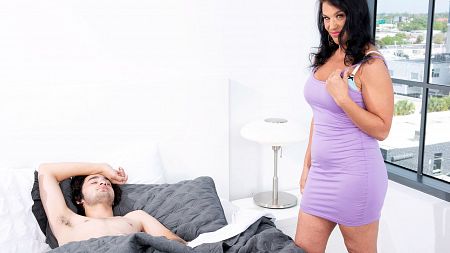 A dude (a teenager!) is sleeping over at his best buddy’s house when suddenly, he feels female hands on his cock. She’s stroking it, but when he opens his eyes, he sees that the person doing the stroking is his buddy’s mother!

“What are you doing?” he asks.

What does he think she’s doing?

“Your husband could come home,” he says, but resistance is futile, and besides, he doesn’t want to resist, anyway. Mercedes Sinclair is a very hot 47-year-old, and she’s about to give him the blow job and fuck of his life.

Mercedes is actually divorced and has a nine-year-old son. Her boyfriend, who’s younger than her, pointed her in our direction, so if he’s willing to share, we’re willing to jack off to his hot girlfriend.

By the way, by teenager, we mean 19 years old, which makes this guy the youngest Mercedes has fucked in a long time.