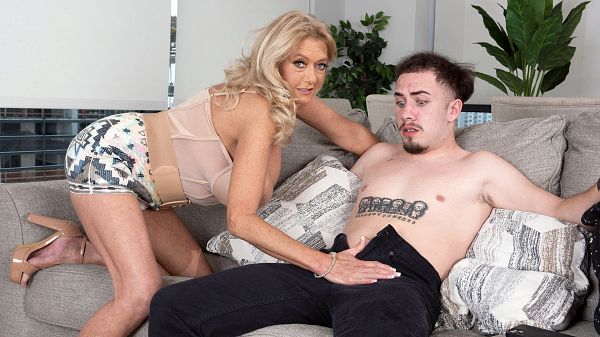 What he doesn’t know is that his step-mother is listening in on the conversation. She comes up from behind him, grabs the phone and talks to her step-son’s buddy.

“He’s going to have to hang up the phone right now,” she says, “because he’s going to fuck his step-mother.”

Like we said, this is not the kind of thing that happens every day, but then again, Tahnee Taylor is not your average step-mom. She’s a 57-year-old beauty with blond hair and big tits, and she’s about to suck and fuck some 21-year-old cock.

This is Tahnee’s first on-camera fuck in eight years and her first at 50PlusMILFs.com. She’s truly a stunner with her beautiful face and voluptuous body, and it’s great to have her back.

Did you watch the scenes you shot for us?

Tahnee: I’m a little shy and I don’t like watching myself. I’m very self-critical. But I have watched them with a boyfriend while having sex and we both liked what we saw.

Has shooting for us changed you at all?

Tahnee: Yes. I have become more open about my sex life.

What were your top sexual encounters?

Tahnee: Other than the scenes I shot for The SCORE Group, being with another woman and a man and being blindfolded while having sex and being massaged by a few men and women while blindfolded and naked.

How do you make a guy feel special?