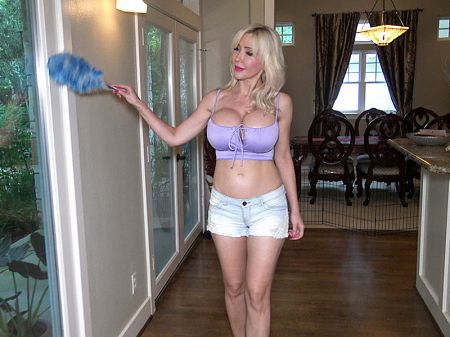 She’s getting pounded, he’s pounding his pud, and at this point, you might be thinking, “Why are we watching a guy jack off?”

But don’t worry. That only lasts for a few seconds, because next we see Victoria herself, 48 years old, blonde, big-titted and looking especially fuckable in a tiny midriff-revealing top that shows off her rack and short shorts. She’s doing housework, doing a little dusting here, a little dusting there, when she looks in on…her husband! He’s the guy who’s jacking off to Victoria fucking on-camera. Yep, he’s Victoria’s hubby, and yet he still jacks to her videos.

Can’t say we blame him.

By the way, the guy in the scene is Victoria’s actual husband and the house is their actual house in Texas. Some guys have all the luck.