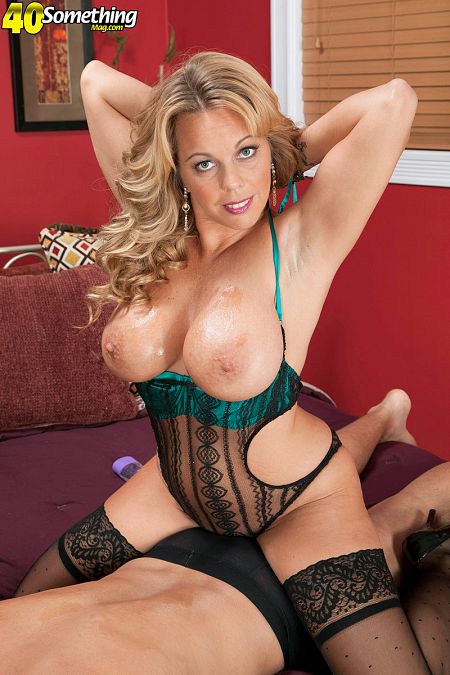 After 40-year-old Amber Lynn Bach‘s big tits are oiled, she massages her fuck buddy with them like they’re rollers and then tit-fucks him, too. A swinger at times, besides being an uninhibited hot wife, her life is sex, sex and more sex of the straight or kinky kind when she’s not living the Florida lifestyle of beach, pool, gym, SCUBA and sightseeing. You can see what excellent shape she is in. A woman like this deserves as much semen as she can get. The perfect example of the modern American wife.

40Something: You liked it immediately?

40Something: But it’s still on-camera, and most people don’t do that.

40Something: So thousands and thousands of people weren’t seeing it?

Amber: Well, it was posted on a website where a lot of people would see it, but it was different in the sense that it was just four people. It was me, my boyfriend at the time, another girl and her husband.

40Something: Was there a cameraman?

Amber: No. We set up the camera ourselves. Now I’ve gotten to a point where I’m on a set and there are 15 people in the room.

Amber: I was still dancing then.