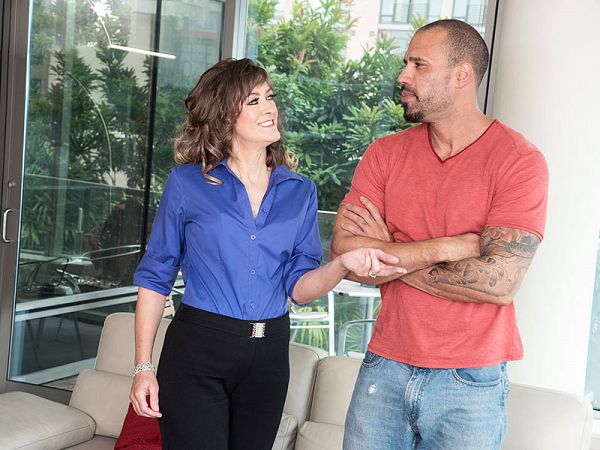 “My wildest swinging experience was at a nude pool party,” said 52-year-old wife and mom Babe Morgan. “Everyone removed their clothes the moment they entered the private party area. I was getting a lot of attention and became involved in a three-way with two other men. I felt worshiped as their hands and lips were all over my body, and I enjoyed pleasuring two cocks at once.”

Here, Babe shows her skills with one cock, but it’s a big one, a lot bigger than either of those two she handled at the pool party. In this scene, Babe is a realtor. She isn’t dressed in the sexy/hooker style that so many Miami realtors prefer. Instead, she’s wearing a respectable blouse and pants. But, here, it’s what’s underneath that counts.

As Carlos finds out, much to his surprise and pleasure, Babe is wearing a bustier, sexy panties and fishnet stockings.

“I have so much more to show you,” Babe says. So much more includes her very nice ass. When Carlos slaps her ass, the sound echoes through the empty apartment.

These realtors…they’re all the same. Fortunately.

Babe is from Arizona. She was sent our way by Leah L’Amour. She became a swinger four years ago. Her favorite types of dates are lifestyle meet and greets. That means hanging out with strangers that she may fuck soon.

Basically, Babe doesn’t have to know you very well to want to fuck you. A minute or two will do.