When Minka is your neighbor…

When Minka is your neighbor… 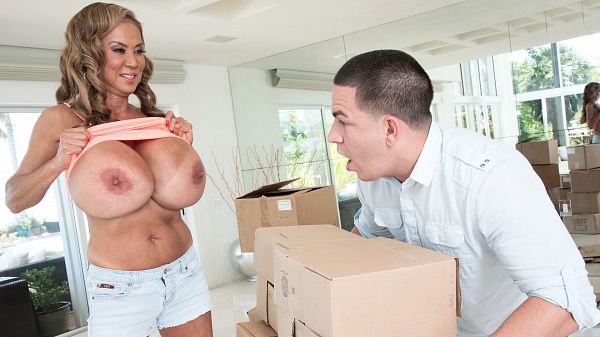 Minka is 33 years older than the guy she’s with here. His name is Peter. He steps outside his house and spots a woman with super-mega-giant knockers taking boxes out of a car and bringing them into the house next door. He recognizes her immediately. He runs over, losing his mind but seizing the moment.

Minka is about to get more boxes when she hears Peter knocking on the door. He stammers that he’s a huge fan and asks if she needs help. Minka asks him if he means the boxes or with “these,” putting her hands on her tits. She tells him to move the boxes to another room and also tells him to keep his eyes on the boxes, not her chest. But, of course, she has her eyes on his cock, and before long, the new neighbors are getting to know each other a lot better.

Minka told us how she got into adult modeling back in 1994.

“One day I was playing in the Asian Olympic Games in Chicago, and my friend, a plastic surgeon, and I were showering together and she said to me, ‘Why don’t you get into men’s magazines? Don’t teach tennis. How much money can you make teaching tennis?’

“I didn’t even know about the magazines. I had never seen them. I sent three Polaroid pictures to SCORE. In all the pictures, I had a natural smile on my face.

See More of Minka at 50PLUSMILFS.COM!