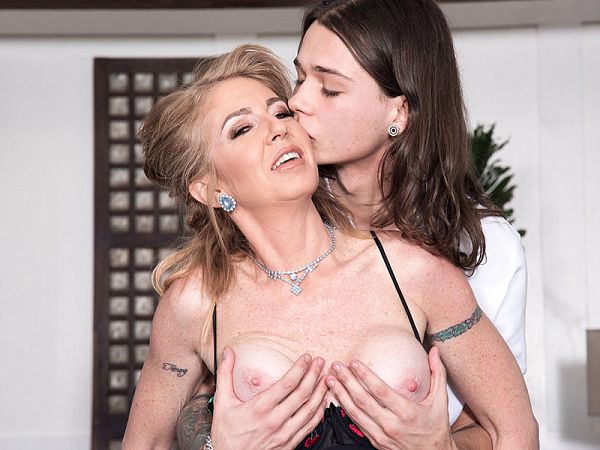 You see, here, Sindi is a teacher, and Matt has followed her home from school. He says he has to talk to her about his grade, but Sindi suspects differently.

“I see the way you look at me in school,” she says after inviting him inside. “Just the way you’re looking at me now.”

Turns out that Ms. Star, who’s divorced, has a thing for him, too, and before long, she’s gagging on his cock and taking it deep inside her pussy. We don’t encourage students to follow their teachers home from school, but in this case, it so happens that Ms. Star had fucked on-camera for 40SomethingMag.com and is a stripper, so this time, it worked out.

Sindi grew up in Los Angeles and lives in Las Vegas. She’s 5’5″ and weighs 120 pounds with D-cup tits. We asked her if the people she knows would be surprised to see her here, and she said, “No. They are used to me being wild.” She’s a swinger but not a nudist. She’s looking for “a great-smelling man who makes me feel special.”

We asked Sindi if she likes being watched while she’s having sex, and she said, “Yes! It turns me on to see their facial expressions and also for them to pull their cocks so I can see them. I love to watch them stroking their cocks while I’m sucking another guy’s cock. So take it out, guys!”

You heard the lady!